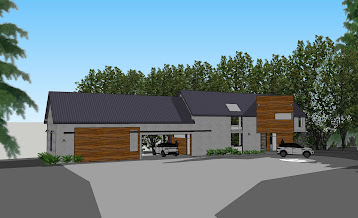 ".....Ok, as you guessed we're not in Oregon - actually we're in Kazakhstan. I work internationally and we've been living permanently overseas for over 12 years, which is why we're now putting down some roots in Oregon. Its possible to call or skype, but there's a 13hr time difference between here and Oregon. To put it another way, 9am in Portland is 10pm here. When Dan and I speak, we normally set up a skype call at a time that's good for both of us.

So I'm guessing one of the main questions is, why Dan? To answer that, I need to give you a little background:

My wife and I came to Portland around May 2016 to look at some houses and land we were interested in. After looking at several properties it became obvious that the only real way forward for us was to buy some land and build what we really wanted. We contacted a couple of design & build firms in the Portland area but they just weren't interested. Either the project was too far out (the land we were considering was near Astoria), or they weren't interested because we weren't "Local".

We scheduled a meeting with Dan and were immediately impressed. Dan is a very easy going guy and a pleasure to be around. He was genuinely excited by our thoughts and plans, and the prospect of being involved in the project. Dan has worked in the past for large architectural firms so the prospect of conducting most of the work remotely, via emails and skype, wasn't a problem for him. He was also practical in bringing to the table financial issues and constraints.

Over the last year Dan has been so much more than just an architect. He willingly scouted out some properties for us that we were interested in, giving practical reports on their viability. Once we completed the deal on the land we wanted, Dan has been instrumental in finding us contractors that are not only extremely competent, but fast becoming close friends. The design he completed for us exceeded all our expectations and we cannot wait to start building. He is now pushing through the costing and permit application, and will act as our oversight once work gets under way.

I work in the construction industry on large commercial projects (high rise buildings, luxury hotels, shopping malls, and airports) and as such I work with a lot of architects. In many cases these architects are very protective of their designs and will fight over any changes. Dan is the complete opposite, and open to suggestions and changes, whilst keeping things in the realms of practicality. Dan seems to embrace that its your home he is designing and not some personal fantasy that must be jealously protected (something I've seen other architects do). Whenever I show Dan's latest drawings to my architect colleagues, they are genuinely impressed with his interpretation of the brief and use of the space." 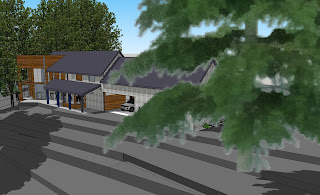